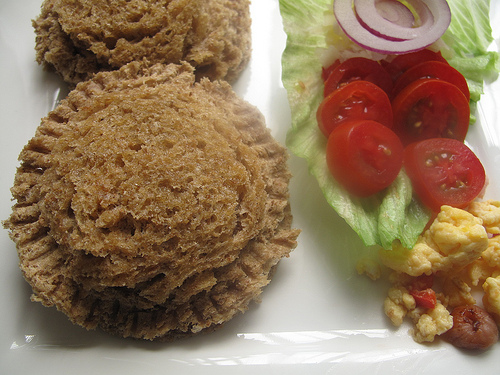 Who has a good memory? 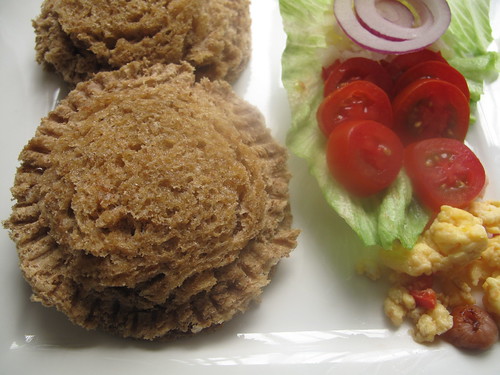 But the minute the words were out of my mouth, I looked around the class of 20+ people…to see I was the only one with hand raised. The same hand, which moments later started slipping down to the amusement of the questioning lady!

A second later,  the instructor started mouthing of words at what I found to be an amazing (and somewhat alarming) pace….with my face falling with each word. The realisation that I couldn’t keep up was apparent after she said the first 5 of the 20 words on her list. I think I lost the plot after green bikini!  I could remember some words but not in the order of mention, and definitely not all!

Again she asked, ‘who has a good memory?’ at which point I slid even further into my seat, face down hoping she wouldn’t remember what the only other female in the crowd (aka I) said a few minutes ago. Alas, that was not the case. She turned on me and asked: ‘How long do you think it will take you to learn those 21 words in sequence?’ I responded: ‘a whole day!’ again to the amusement of the entire class. She asked another person who replied that in an hour of less it was likely that the words could be memorised. She then said, we can do it in 5 minutes!

Now I could believe anything but 5 minutes did seem like an incredibly short time till she gave it away: the secret to knowing the words was establishing a pattern which is generally called the Art of Memory!

The Art of Memory or Ars Memorativa (“art of memory” in Latin) is a general term used to designate a loosely associated group of mnemonic principles and techniques used to organize memory impressions, improve recall, and assist in the combination and ‘invention’ of ideas.

It is sometimes referred to as mnemotechnics.

It has existed as a recognized group of principles and techniques since at least as early as the middle of the first millennium BCE, and was usually associated with training in rhetoric or logic, but variants of the art were employed in other contexts, particularly the religious and the magical.

She started off with the words first on their own

And then in a short story:

The drill went through a bar of soap and out came some green paint, which dripped over a padlock chained to a caravan, which was pulled by a Yellow Rolls Royce.

In the car sat Young man in Brown shorts and a Brown shirt, smoking a Brown cigar. He had on a Top hat and next to him was a Lady in a green bikini reading the Encyclopaedia Britannica with 4 biscuits in each corner.

She held a flashlight which shone on her dangling earring. On her head, she had a floppy hat with a feather at the side on which stood a Parrot scratching its flea-infested head!

It all seemed so easy then. The 2 of the 4 groups in class had a go and when it was my turn, she asked me to do it in reverse order….punishment? I say no, Reward! Because I did it and I tell you, the feeling of pride that engulfed me knew and still knows no bounds. Of course the key to success was being able to picture it.

I feel accomplished. So accomplished because it wasn’t something I thought I could do….yet I did it. I guess it also gives me hope…to know that if I can find a pattern, I can remember more and perhaps it could help me. Once the lady strung the words together in a ‘tale’, I could see the colours, visualise the car driving off and in my/the mind, I guess I could see all those things happening in almost a ‘snapshot’ of time. Now I’m convinced that we absorb a lot more than we realise! I hope to use this technique in future: let’s say to remember which aisle the baking things are on at a not-so-local-supermarket  :-), and more! I’ll keep you posted. Who knows what game shows I’ll go on in future.

The original Brewer’s Dictionary of Phrase and Fable calls it a Scotch breakfast and describes it as “a substantial breakfast of sundry sorts of good things to eat and drink.”

Now since I only had eggs, bacon, sausages, cheese and some chilli…I guess it doesn’t entirely qualify as the full brekkie. Chilli in eggs? Yes, chilli in eggs. I love chillies. I often joke by saying the only thing I don’t have chilli in is my milk!

Also, there’s a ‘hot’ event : ‘ Think Spice – Red chillies’ hosted by Lakshmi at Kitchen Chronicles  and Sunita of Sunita’s world! Check it out if you can! 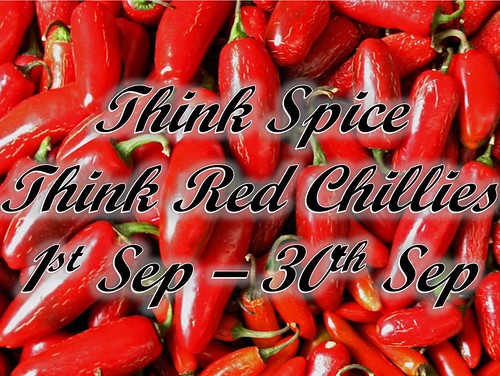 To make them, here’s what you need and how to go about it

For the scrambled eggs

Make scrambled eggs by lightly whisking milk and chilli. In a pan on medium to low heat, pour egg mix and using a wooden spoon mix till eggs just set (or to taste) 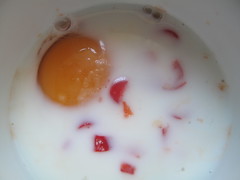 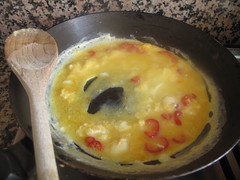 When ready, take off the heat and let cool down 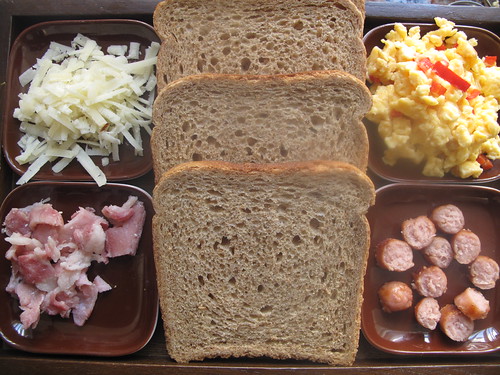 While the scrambled egg cools down, cut out discs from the bread to make circles using a 3-inch cookie cutter or a teacup. (If you prefer to make square tarts, carefully slice off the  crusts) 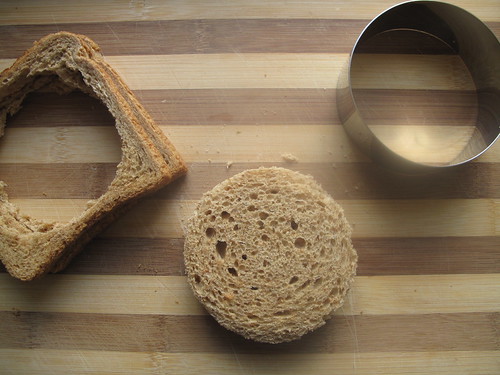 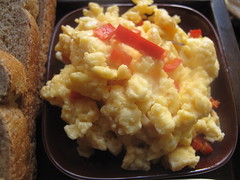 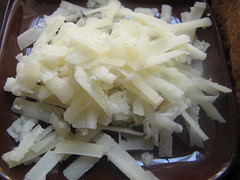 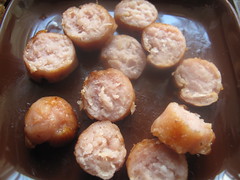 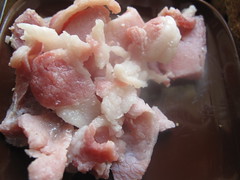 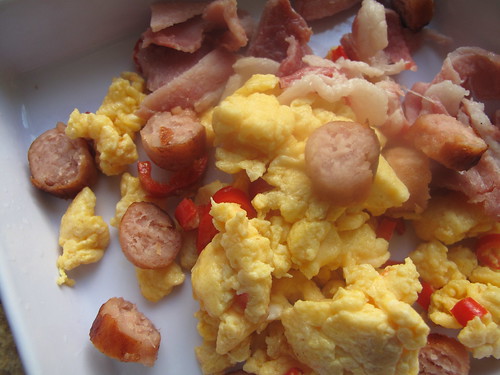 One one disc of bread, place a scant tablespoon of mixture and top with another slice of bread. Now..in the recipe book, there’s a special 3-inch cut-n-seal ‘equipment’ which is used to create the tart from this assembly. However, in the absence of that in my kichen, I gently pressed the edges together hoping the gluten in the bread  would get it to seal a bit and then finishing the sealing process by pressing down on the edges with a fork. 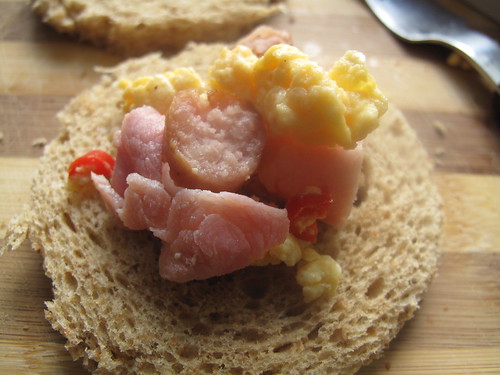 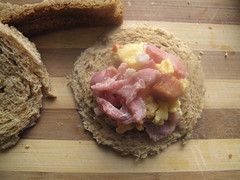 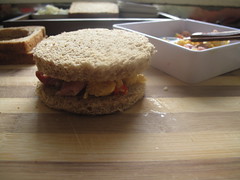 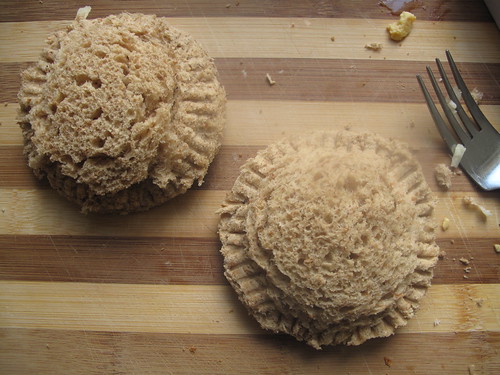 My results were mixed but forging ahead was the only way I was going to get any breakfast 🙂 so, I continued.

Lightly brush both sides with melted butter and then place on a baking tray and bake for 10-12 minutes or until lightly toasted.

While the tarts are in the oven, prepare the garnish and set the plate up (I had some scrambled eggs left over since I decided to make only 2 tarts. This mix could have made 6-8 tarts easily) 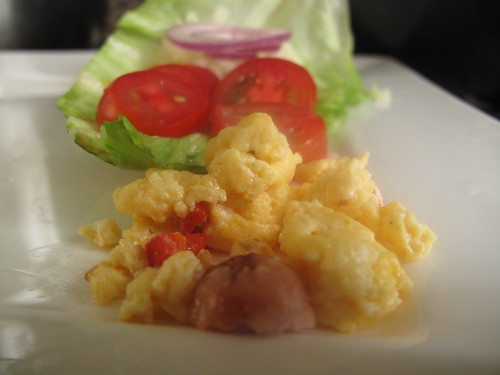 After 10 minutes, haul tarts out of the oven and serve. 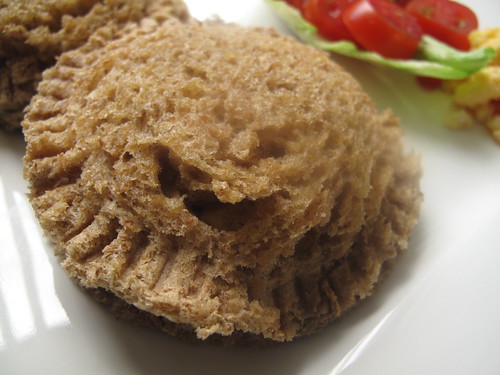 Enjoy, with a cuppa 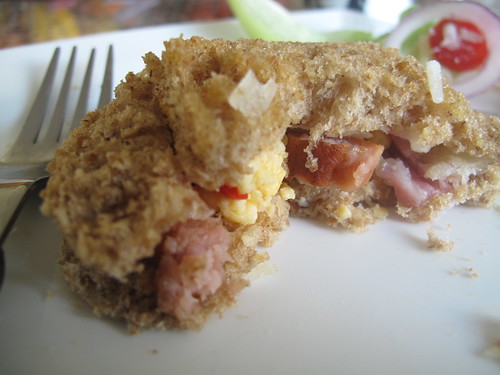