I’ve loved Nina Simone since 1994, thanks to a boyfriend who loved her. Her voice – rich, smooth; he words – full of hope, longing, loss and love. There was something about her that drew me 23 years ago and hasn’t left me since, even past the memories of that relationship and others. 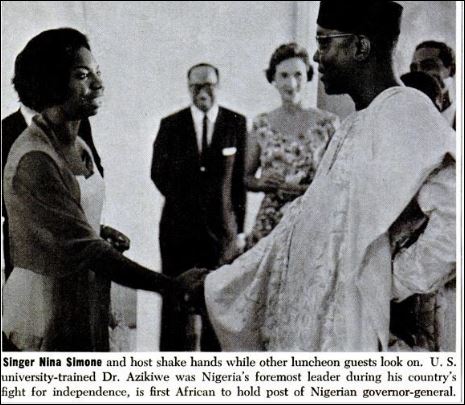 Her ‘Feeling Good’ is the only song that embraces my range of tones and pitch and my voice. It is the song that saved my children from embarrassment when at a school show they called upon parents to sing and I got pushed out. Lol. They confessed that at first they held their breaths and as I sang, they slowly let the pent-up, mama-will-disgrace-us air out of their lungs. They even confessed pride in me – not just my courage but also my voice. You. Should. Too. There.

After Spandau Ballet’s Gold, ‘Feeling Good’ is my Karaoke fave.

I love Nina Simone and I was thrilled to discover that she’d been to Lagos, to my Lagos in December 1961, a year after we – Nigeria as a country, proclaimed Independence.

Nina came, as part of the American Society of African Culture (AMSAC), an organisation, founded in 1956 and one that desired to ‘expose African Americans to their African heritage. This aim was pursued through organising exhibitions, lectures, music performances, and conferences in the United States (primarily New York) and Africa (occasionally).

After 1967, AMSAC’s membership sharply declined after it was named as one of the organisations that was funded by the Central Intelligence Agency (CIA)…and ceased to exist by 1969. However, to many of its members the organisation had a huge significance, especially to the visitors of the 1961 Lagos Festival, AMSAC provided opportunities to go ‘back to the motherland’;  Source – Rosey E. Pool

The March 1962 edition of Ebony records this historic visit. She’s not on the cover – that’s a singer, Leslie Uggams but she is featured on pages 92 and 94. 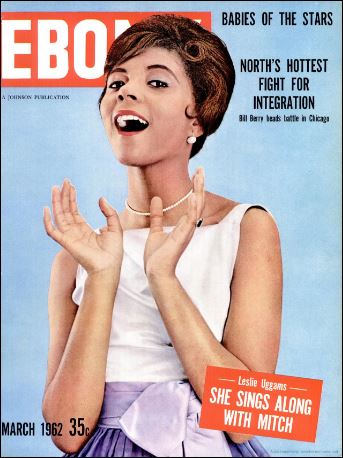 At the Lagos Festival, hosted by Dr. Nnamdi Azikiwe, different performances held – by Atilogu dancers, Tiv dancers, and Nina sang, among others.

The AMSAC delegation with President Nnamdi Azikiwe (in the middle, dressed in white with a black hat), Nigeria 1961. Rosey E. Pool is partially visible, second from the right, top row. Langston Hughes stands in the front, fourth from the left. Nina Simone is partially visible on the left side of Azikiwe, in the middle of the picture. Source: Randy Weston, African Rhythms. The Autobiography of Randy Weston (Durham, NC, Duke University Press, 2010), p. 148. Courtesy of Moorland-Spingarn Library, Howard University.

I’d been working on a drink, of Coconut Candy and a friend suggested I ‘name’ it, as well as my other creations.

And so I present to you the ‘Nina Simone’, a tribute to the amazing, complicated, life of a woman – rich, dark, bittersweet, hard and soft, full of history and personal geography. 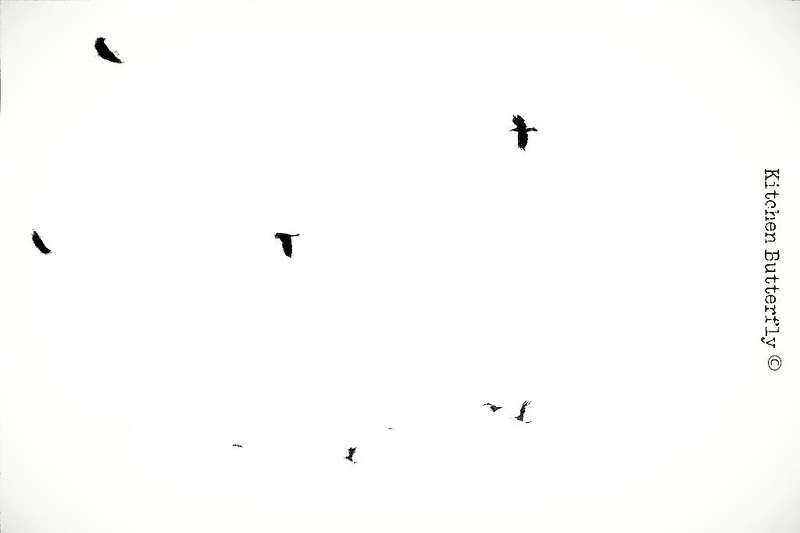 I’ve named this drink in her honour. It has coconut candy – a hard, honey and fresh coconut confection – as its base flavour. I steeped the coconut candy in vodka over a few weeks and then thinned with a light fresh ginger syrup.

To serve, I put some coconut candy at the base of the glass 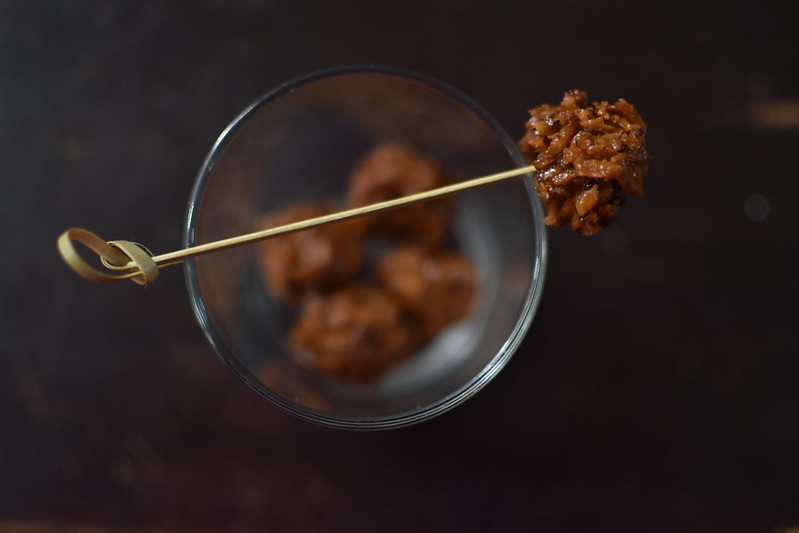 I add some ice 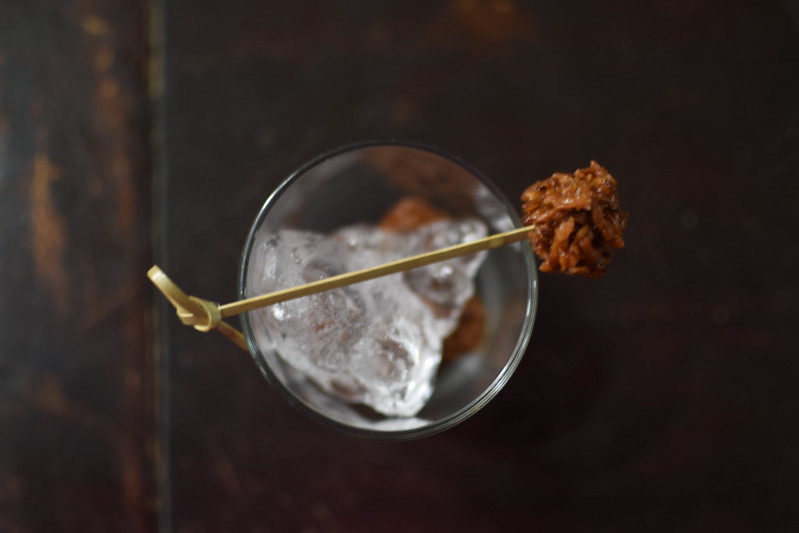 Top with my coconut candy liqueur 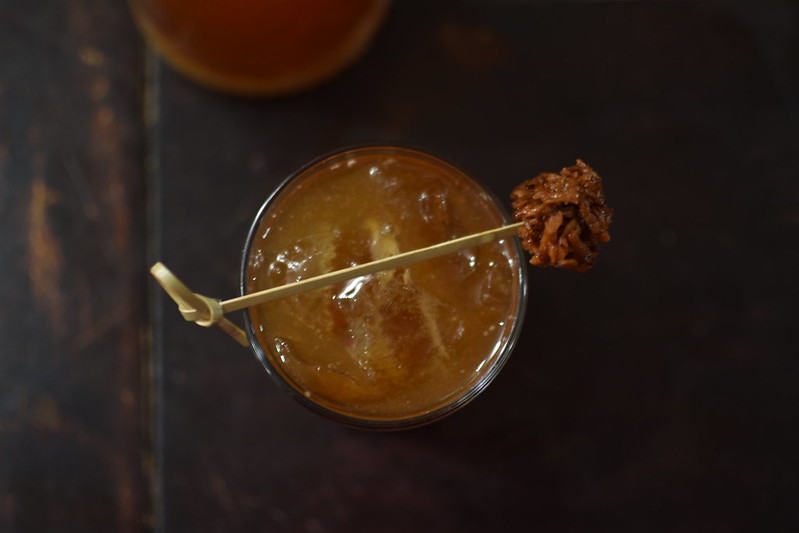 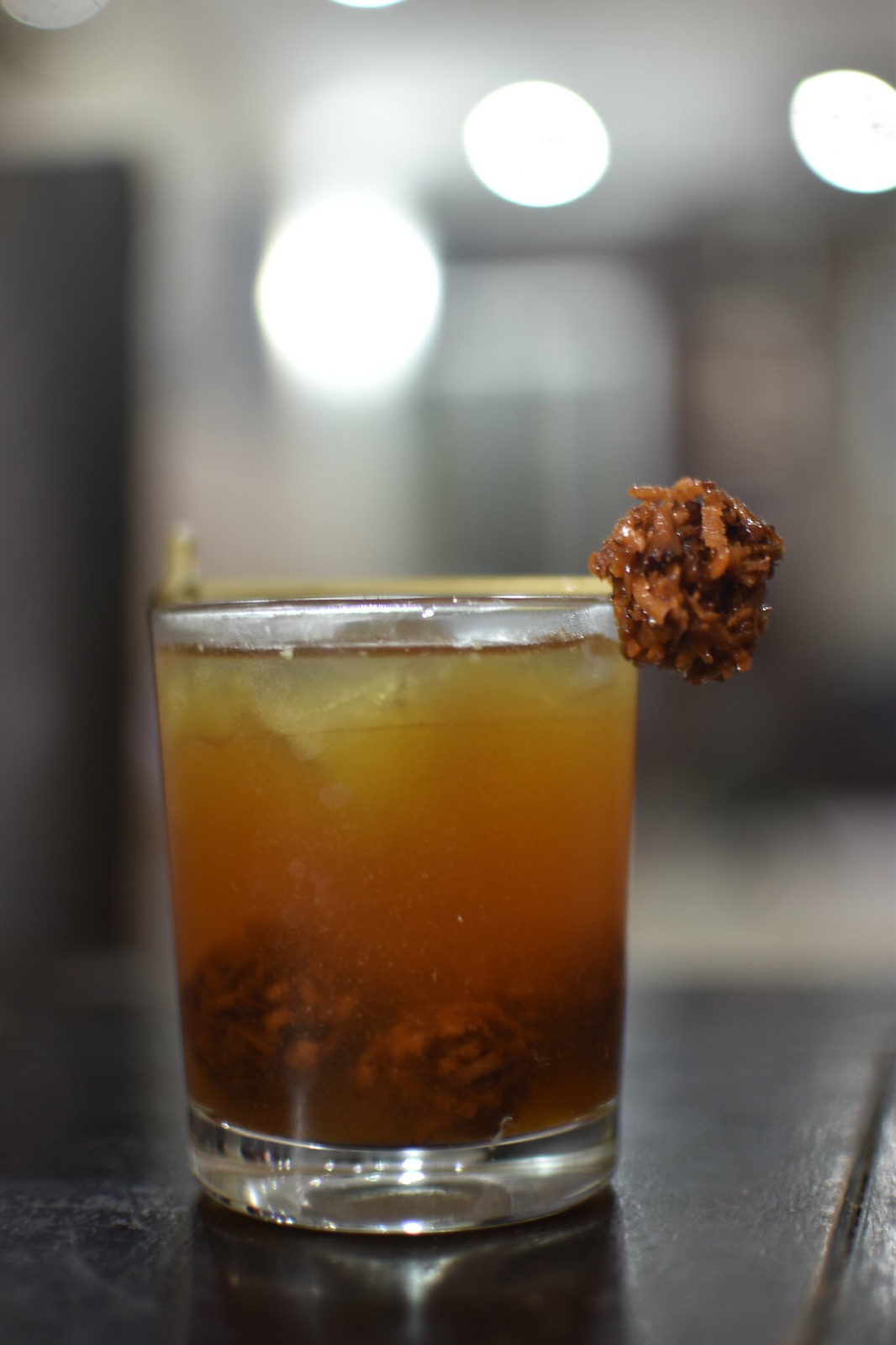 I recommend you chomp on a coconut candy ball, have a swig from your glass and then eat, drink, eat, drink, sing, think of Nina.

Passionate about food in its entirety – cooking, eating, dreaming, writing and photographing it. ‘Traveller, by plate’, using foodways – the social, cultural and economic practices relating to the production and consumption of food to explore Nigerian cuisine & the world for ‘food is more than eating’.
You might also like
Drink recipesNew Nigerian kitchenBakingDrinks

The Anatomy of Lemongrass