previous
Technique: How to Juice a Lime
random
next
Frejon: Of Nigerian And Brazilian History
1954 views 0 likes 2 comments This was the point of the lime marmalade…but it was TOO bitter. Even to feature, not less star in the dish. Thankfully, I had some great, store-bought orange marmalade which took its rightful place at the table. 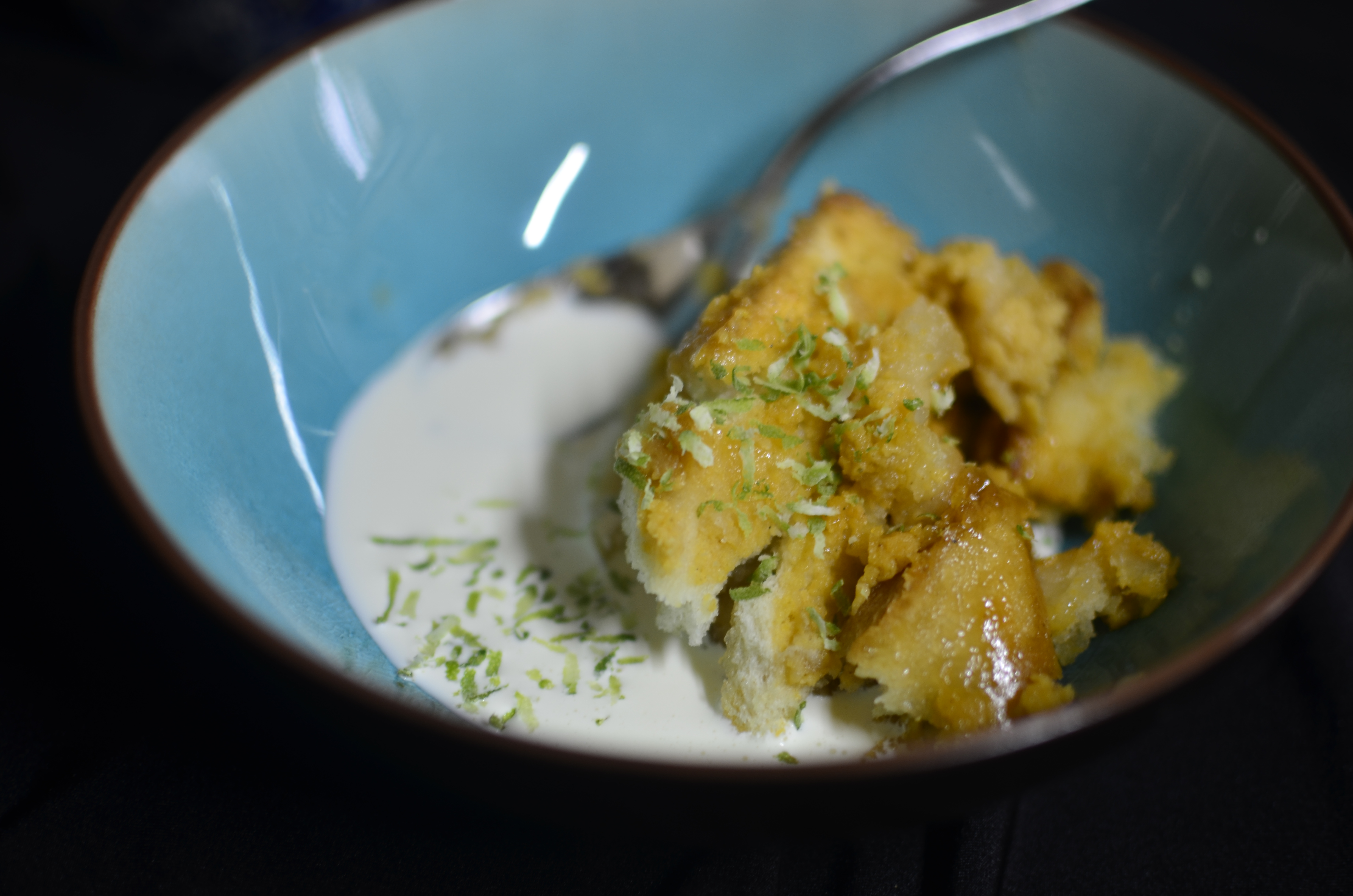 This is another recipe from Zina. This time though, she cooked. Baked it. For us.

“These culinary creations all come from the heart. The bread and butter pudding recipe of last year was an homage to her father. Zina: “The ‘agege bread’ is covered with a little lime jelly and cooked in a papaya custard, made with Peak milk of course. Bread and butter pudding is very English and I suppose this represents him sending us to England for school. But the Agege bread and the palm wine is obviously very Nigerian. Also papaya and lime was his breakfast in Nigeria, and the recipe references this. He also loved lime marmalade, which is a rare flavour for that preserve, and whenever I see it, I think of him.” 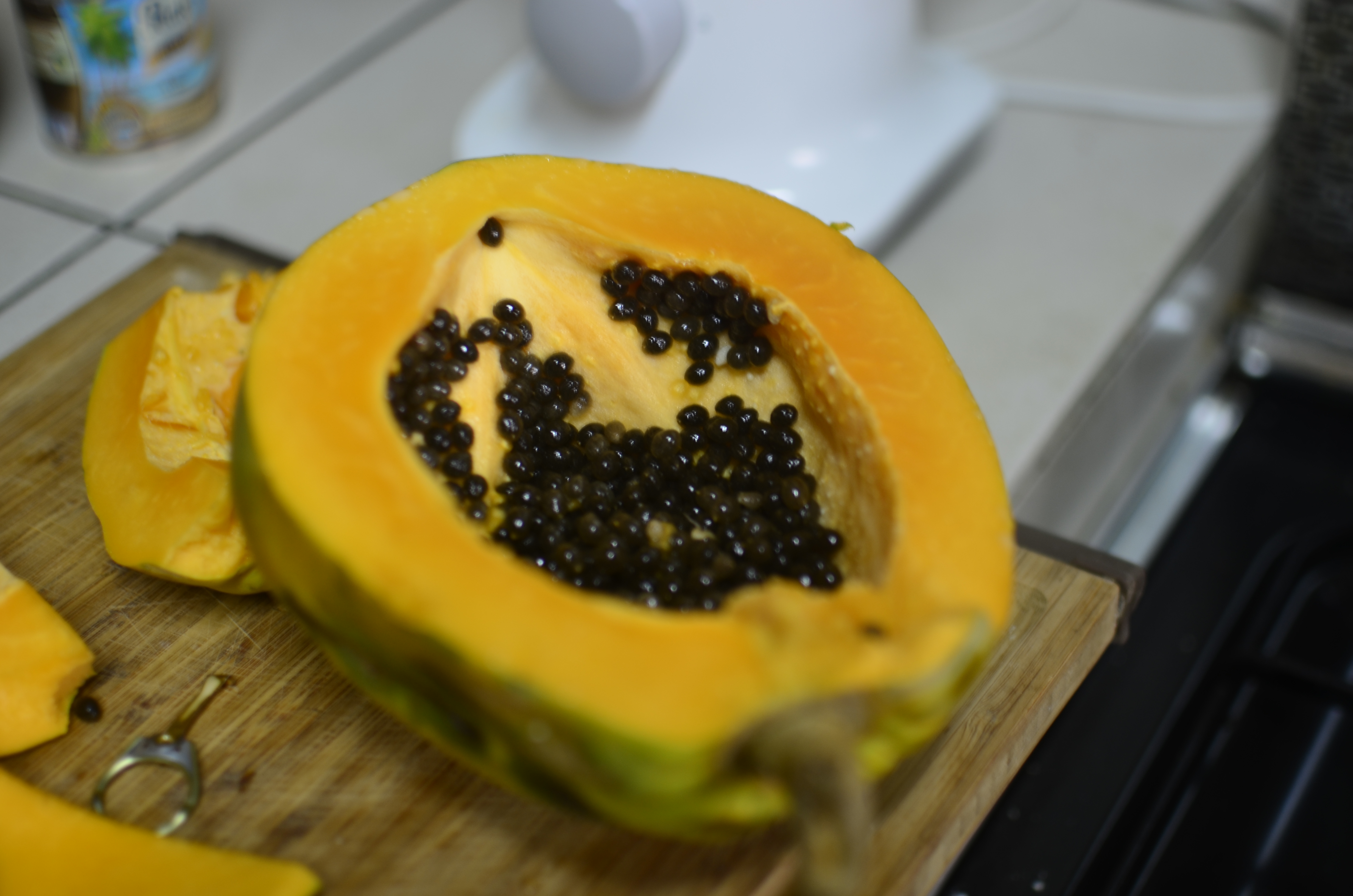 Use stale bread – fresh bread results in an unpleasant, soggy texture to the pudding

Butter and spread marmalade on the slices of bread. Stack them up and cut on the diagonal, forming 2 triangles on each slice. 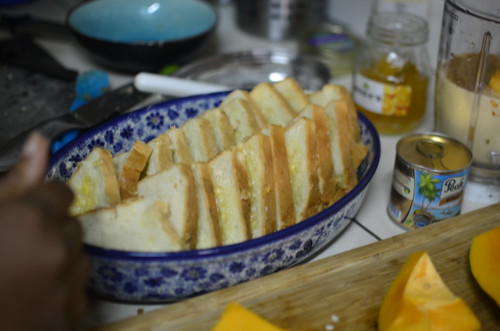 Arrange the slices in overlapping rows in the buttered dish. 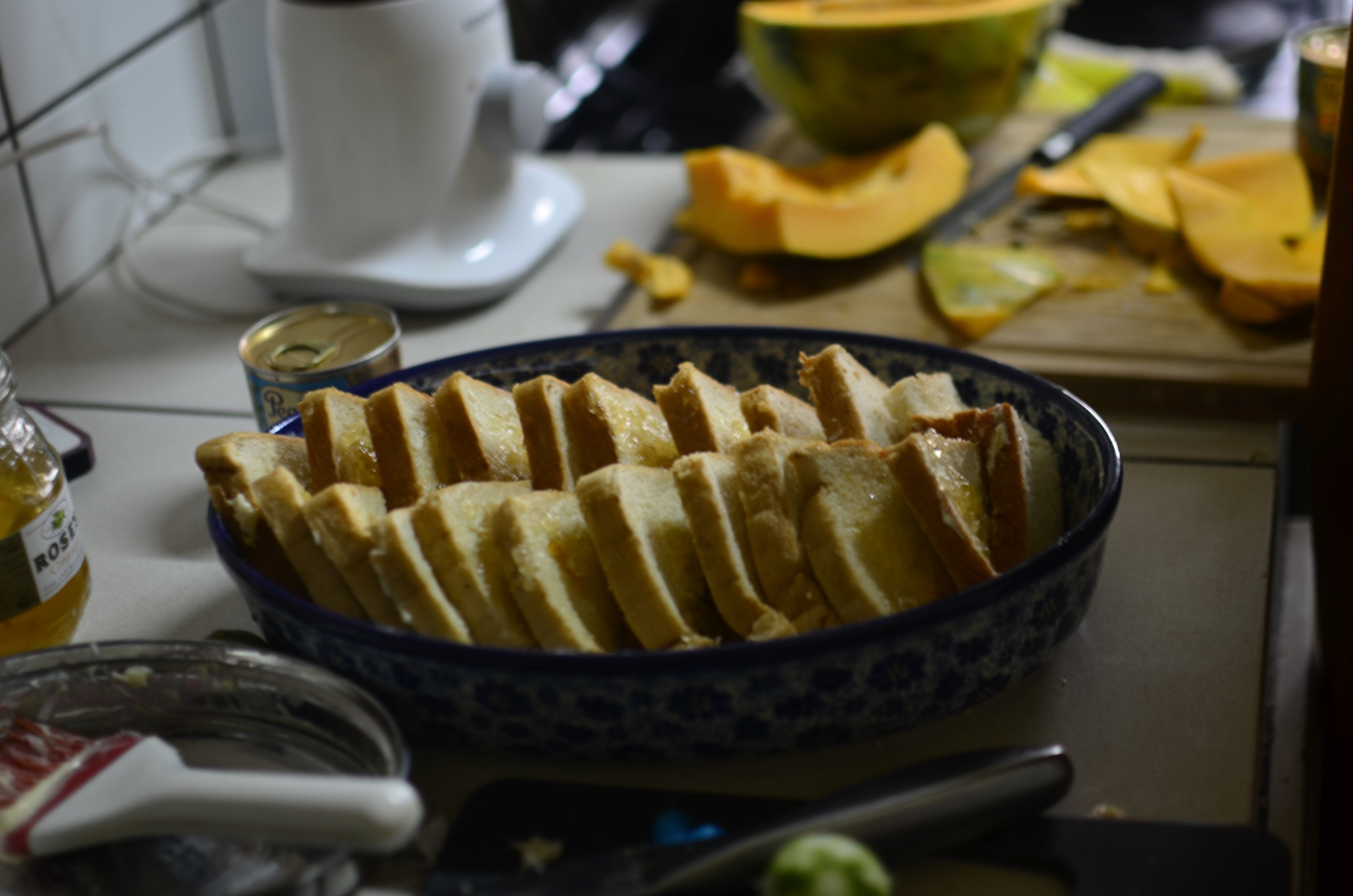 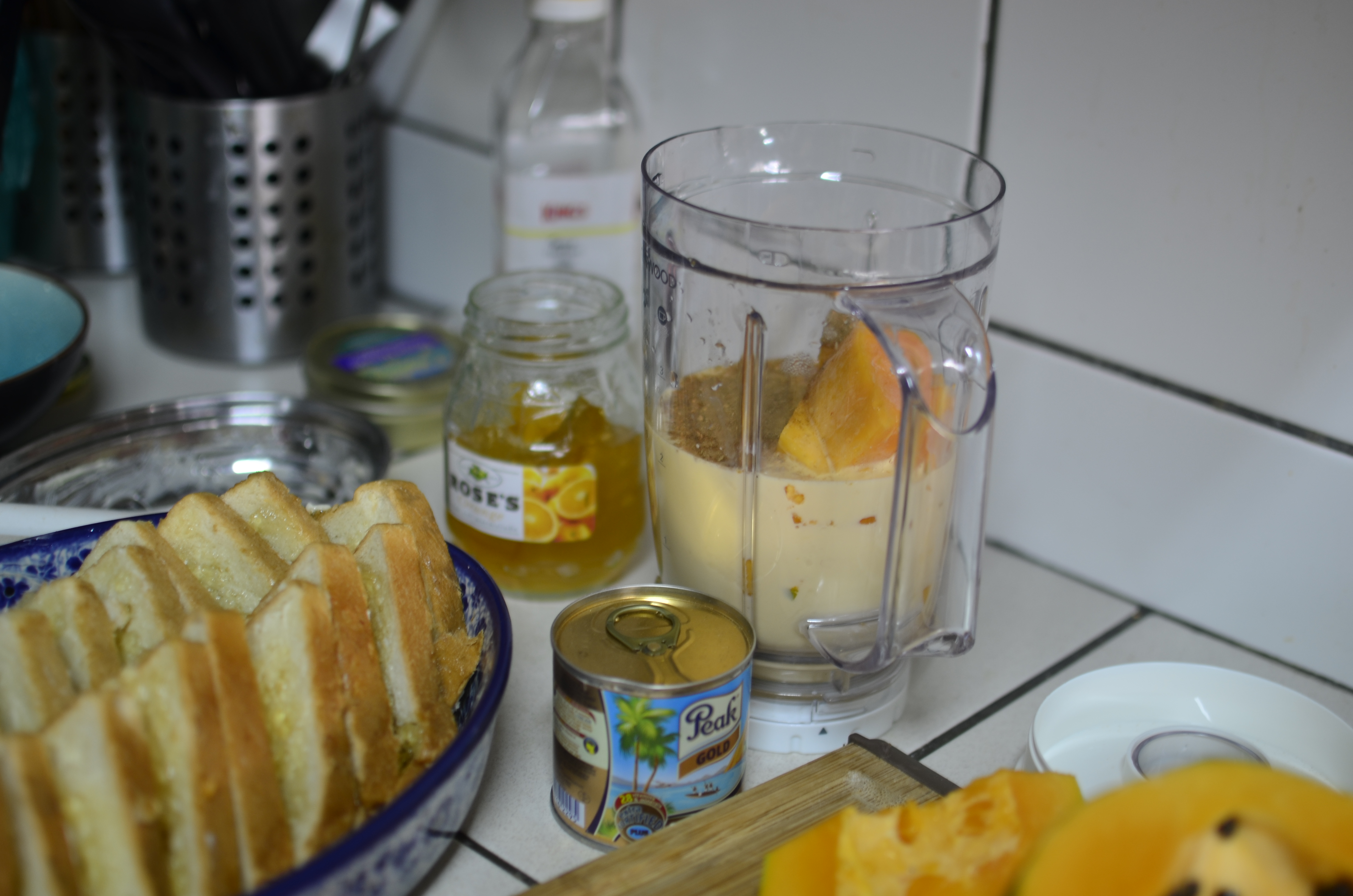 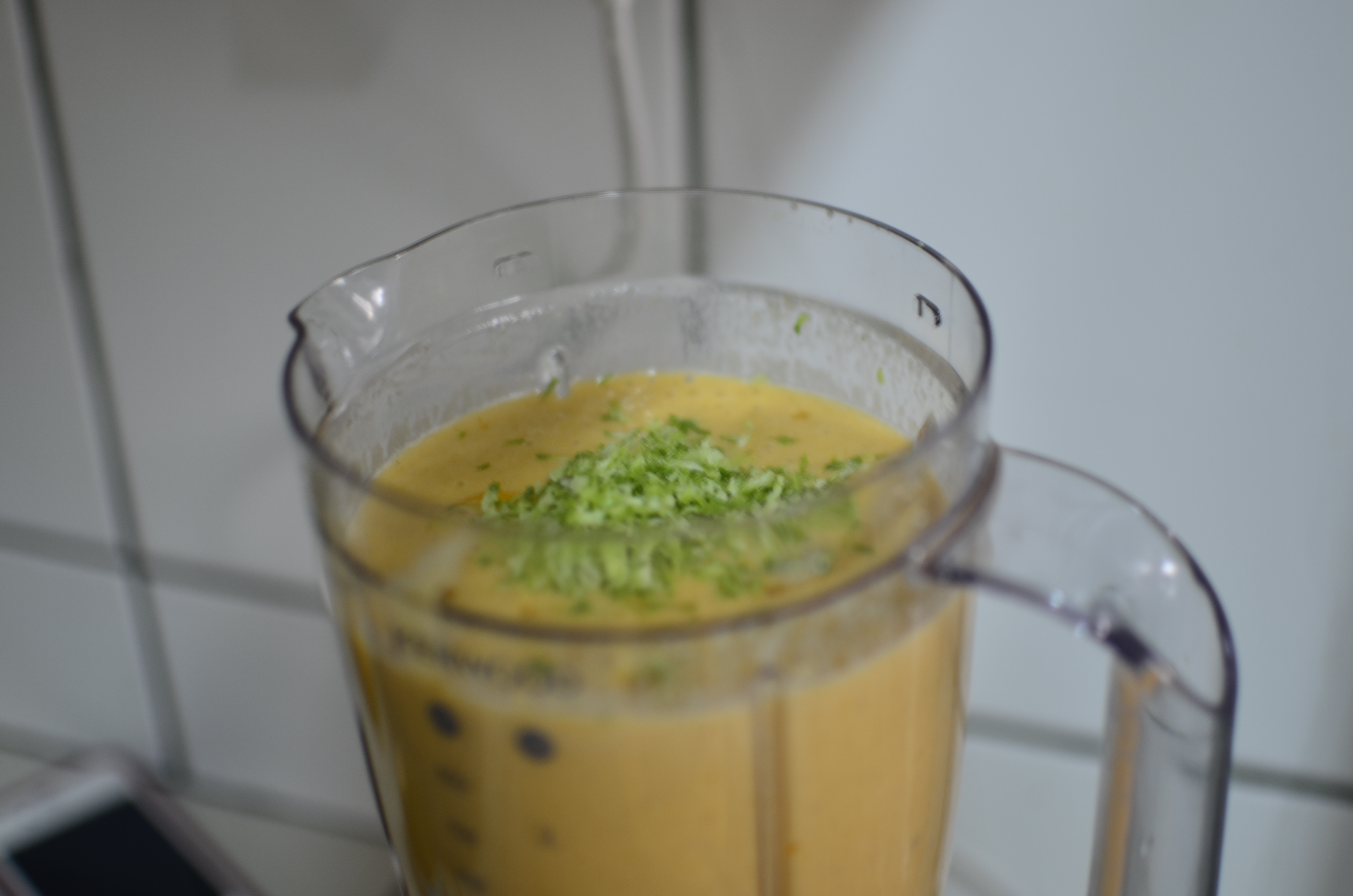 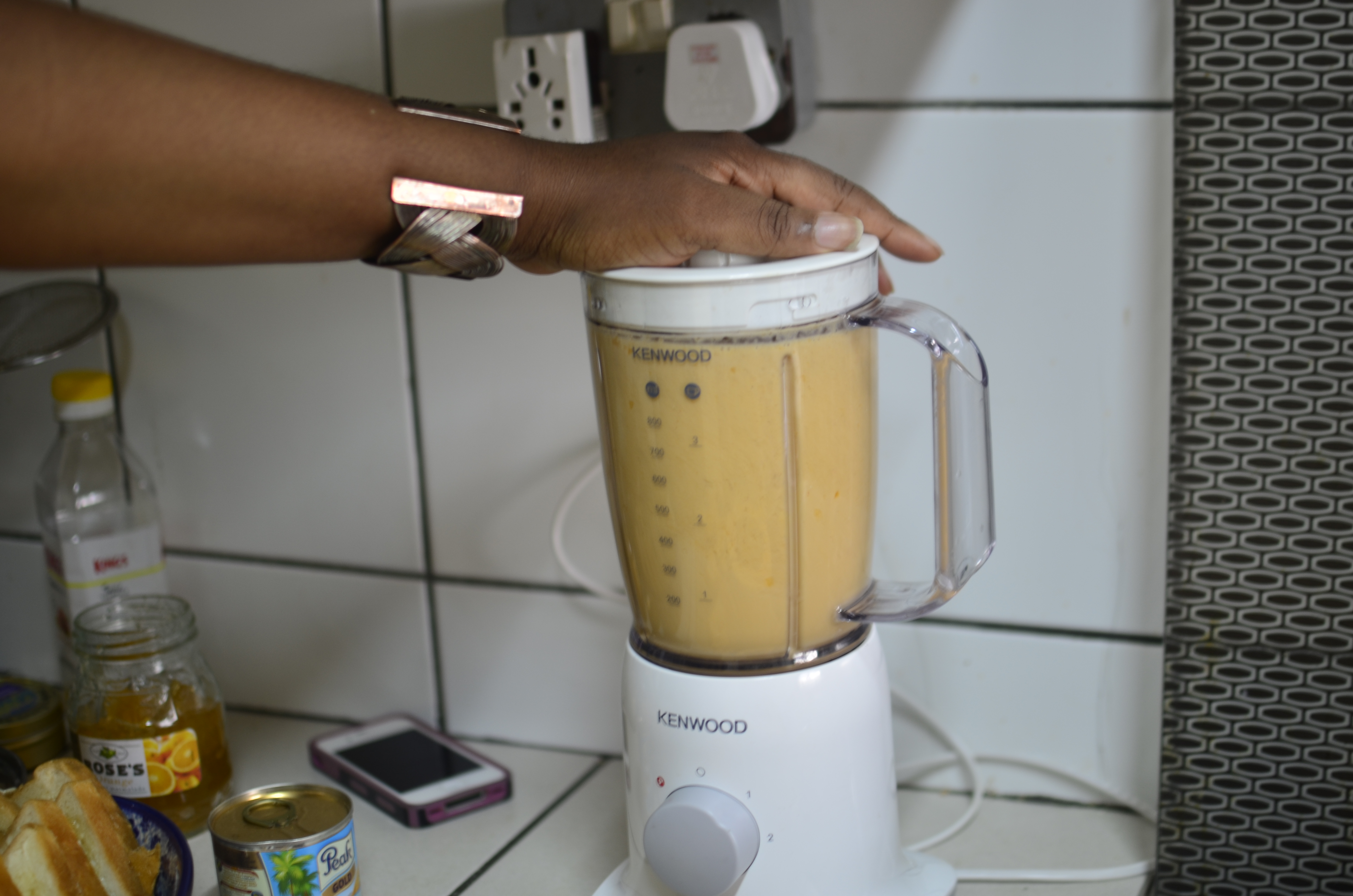 Pour over the bread. Your next steps will be determined by the kind of bread pudding you like. 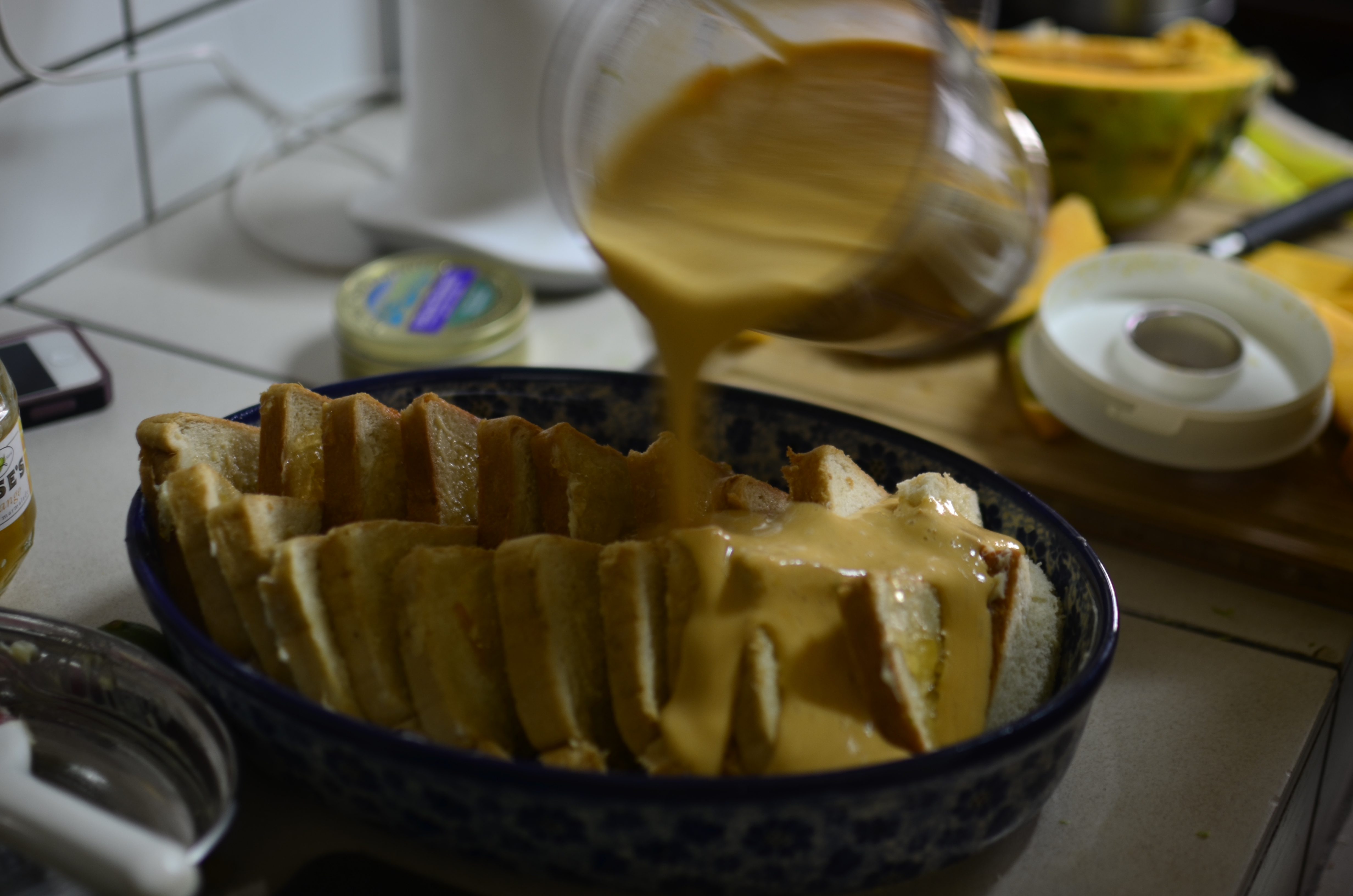 If you want a creamy, soft pudding, then let your bread soak in the custard for 15 – 20 minutes. If you want to enjoy a spectrum of bread textures that begins at the base of the dish with unctuous baked bread and finishes with toasty, crisp peaks with barely a whisper of custard, then slide it into the oven right after assembling. 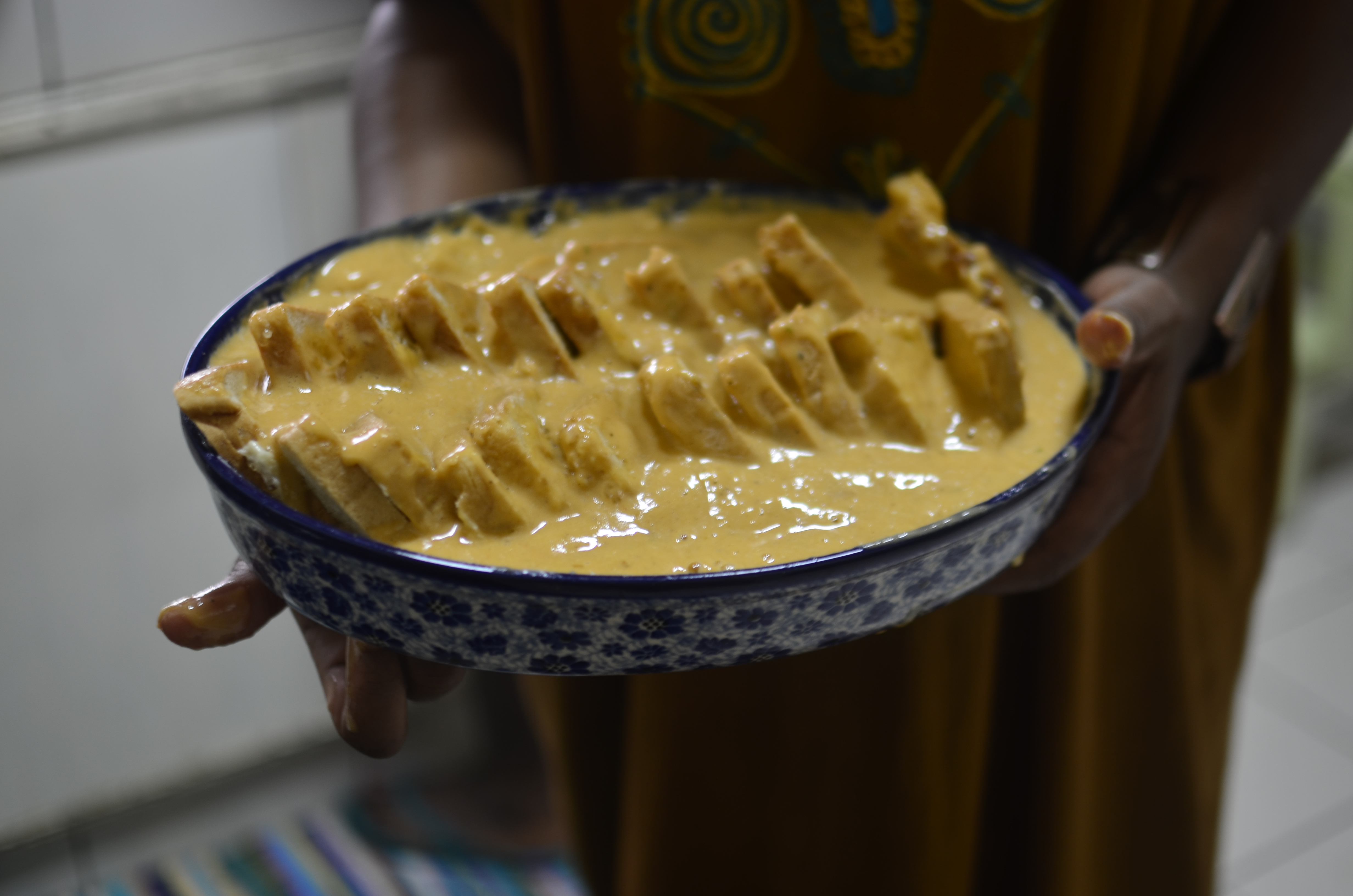 Cook for 35 – 45 minutes in the centre of the oven until golden brown. 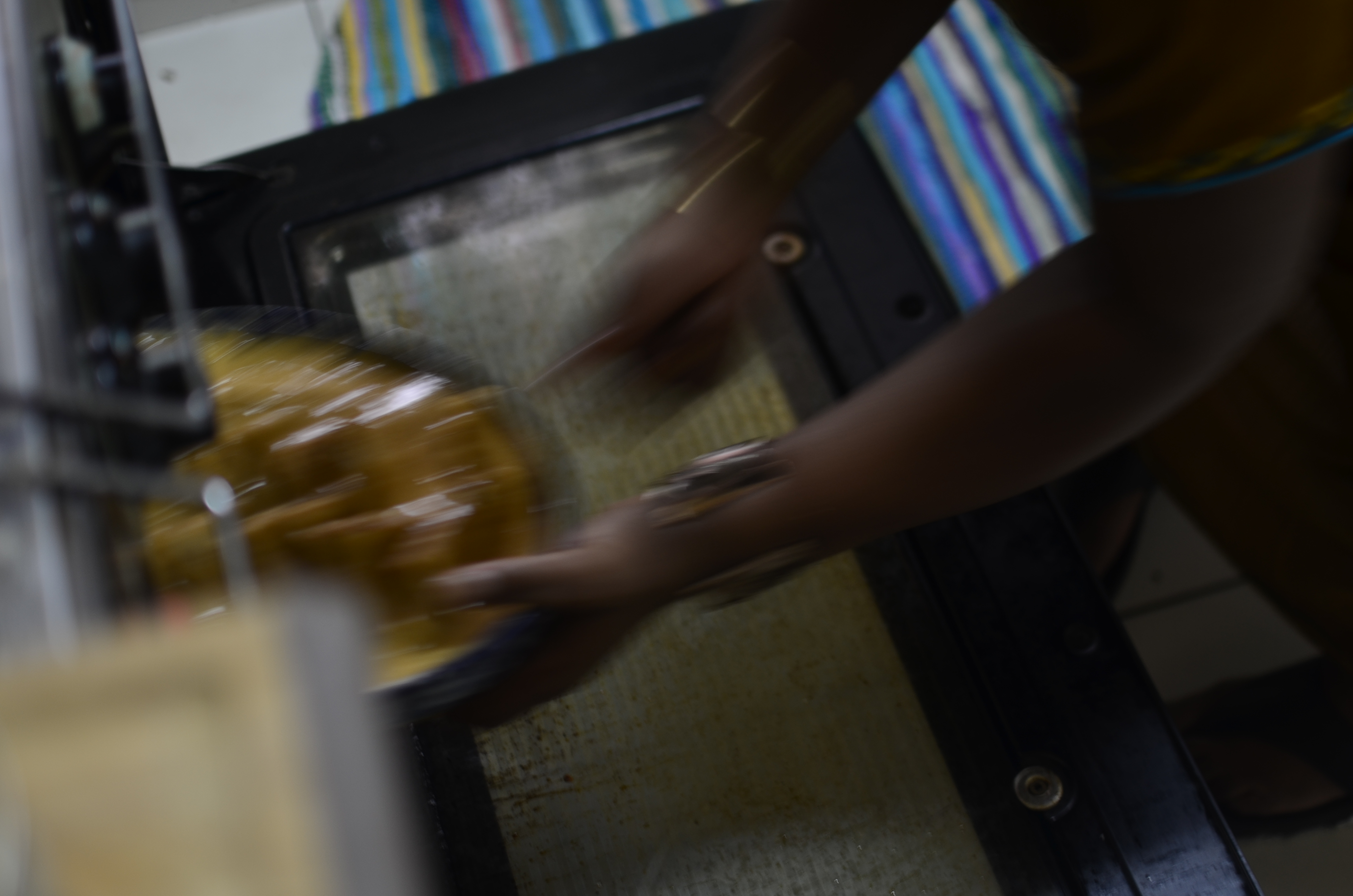 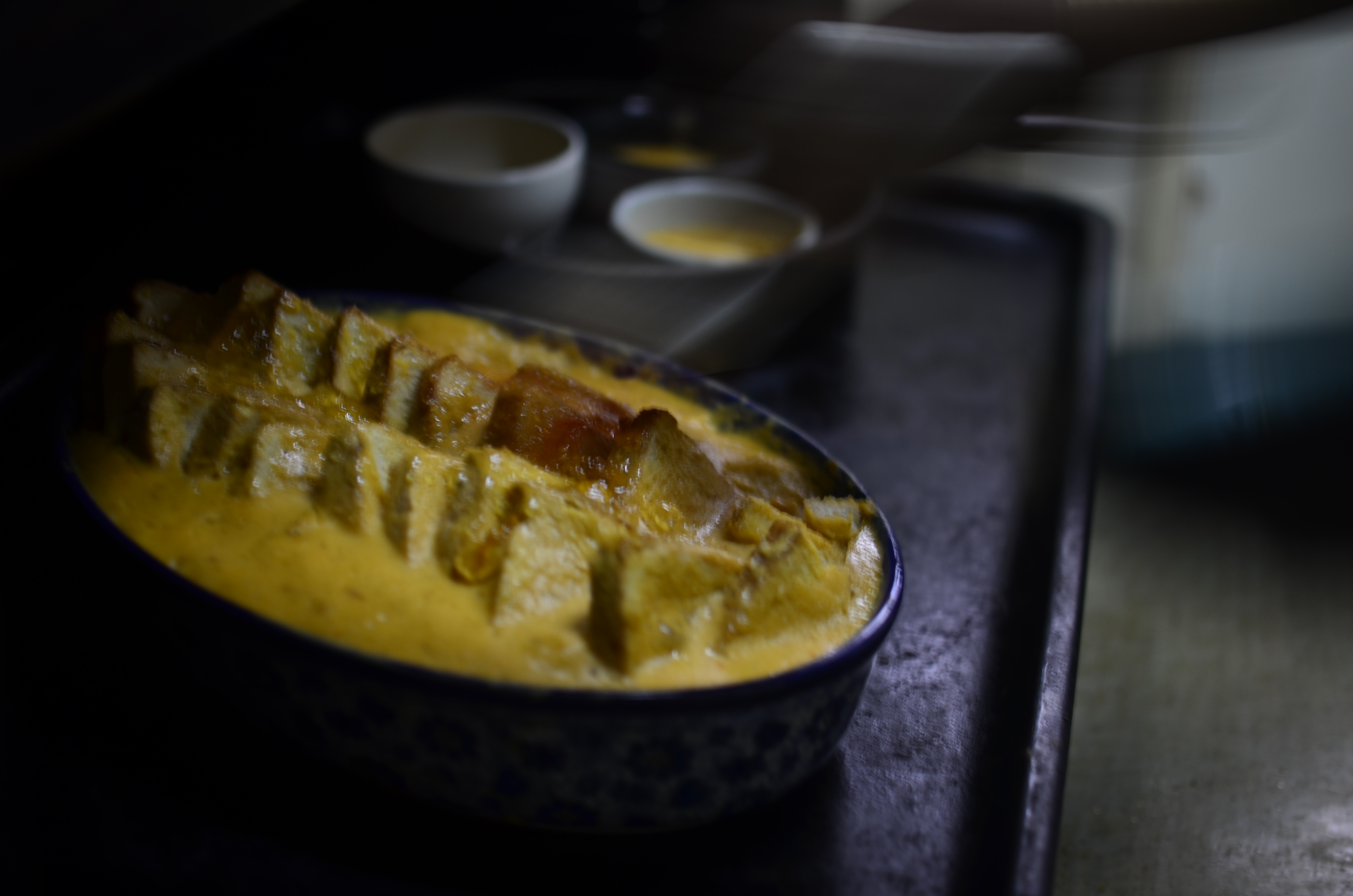 About 10 minutes to the end of cooking time, glaze the top of the pudding with warmed marmalade. Let bake through. Once golden, remove from the oven and allow to stand for 10 minutes before serving. The custard will firm up a bit. 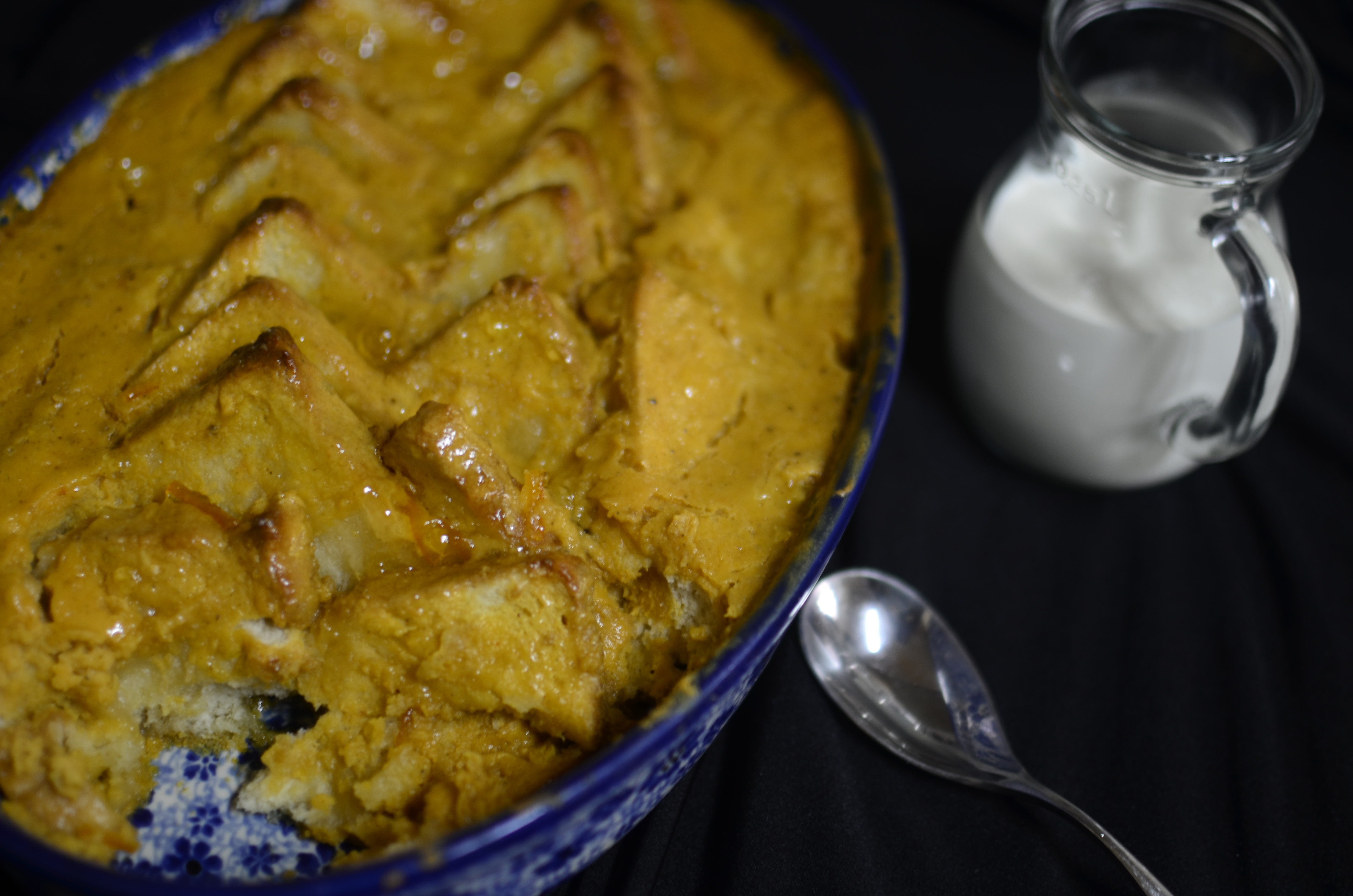 grate some lime zest, pull out the cream and set up shop to dine. To feast. 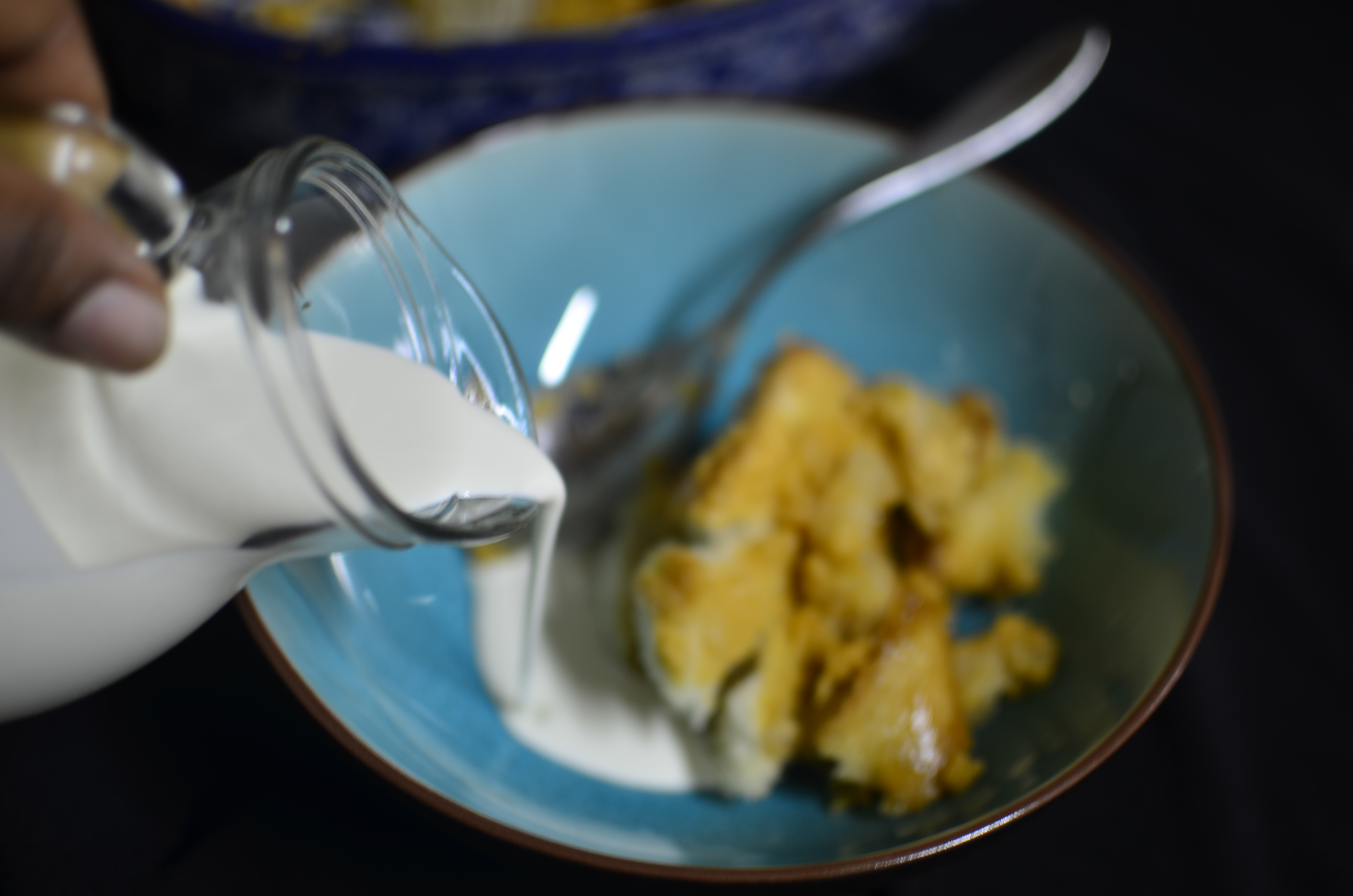 I loved it. Love it. Will be making it. I love how beautiful it looked, and how easy it was to achieve the ‘look’. If I hadn’t seen Zina arrange the bread triangles, I might have been wary of attempting it on my own….so that was one. The custard was amazing – creamy, blossomy with almost pumpkin qualities.

The spice blend created very warm, autumn-like flavours. Which I thoroughly enjoyed warm and fresh from the oven. For dessert. With a healthy portion of cream, not whipped and garnished with microplaned lime zest.

And of course, it kicked off my morning. Perfect as ‘Breakfast of Champions’.

Thank you, Zina. I’ll definitely make this. This time with proper lime marmalade, homemade or bought. You didn’t think I’d given up on this lime marmalade thing, did you? No way…not that easy.

Passionate about food in its entirety – cooking, eating, dreaming, writing and photographing it. ‘Traveller, by plate’, using foodways – the social, cultural and economic practices relating to the production and consumption of food to explore Nigerian cuisine & the world for ‘food is more than eating’.
You might also like
DessertNigerian dessertsBakingNigerian Cuisine

Filipino Fruit Salad: Virtue in a Can